To share your memory on the wall of Ernest Billiard, sign in using one of the following options:

Mac was born on April 12, 1934, to Ernest and Kate Billiard in Hagerman, Idaho.  As the baby of the family, he was doted on by his two loving sisters, Eloise and Eileen.

Mac grew up in Hagerman where he graduated from Hagerman High School in 1952.  He met the love of his life, Janet Palmer after high school and they were married on December 23, 1953, at the Hagerman Methodist Church.  They enjoyed 66 years of marriage.  Mac and Janet were blessed with three children, Jeri Ann, Michael, and Tony.

Mac served in the United States Air Force for four years.  He was stationed in Germany and Mountain Home.  After being discharged from the Air Force, he was employed by Ellis Fish Hatchery in Hagerman.

In 1959, Mac followed in his father’s footsteps and began a 35-year career with Idaho Power.  This career provided many opportunities for his family, which included living in multiple locations along the Snake River. Mac held many positions in Idaho Power and retired as the Manager of Hells Canyon Complex in 1994.

Upon retirement, Mac and Janet returned to Hagerman to a home they had built themselves.  His retirement was full of many activities which included spending time with his family, hunting, golfing, and woodworking.

Mac was a lifetime member of the Hagerman Methodist Church where he served as a Boy Scout Leader and Trustee Chairman.  Mac was also a 63-year Mason, being a member in Hagerman, Richfield, Glenns Ferry, and Bannack, MT lodges. Mac served as Master of the Hagerman lodge multiple times.  He was also a member of the Scottish Rite.  Mac also worked with the Job’s Daughters and Rainbow Girls.

Mac served as a Hagerman Cemetery Board Chairman for many years.  During that time, Mac was instrumental in many improvements in the cemetery, of which he was immensely proud.

Mac is survived by the love of his life, Janet, and his children Jeri Ann Billiard of Hagerman and Tony (Jody) Billiard of Buhl.  He is also survived by his grandchildren Nicole (Gilbert) Ferreira of Jerome, Nick Billiard of Hagerman, and Michael Billiard and his fiancé Jessica Simons of Twin Falls.  He will also be greatly missed by his great-grandchildren, Addy Jae, Zavier and Layla Ferreira, and Lilly Snapp, and numerous other relatives that he loved and cared for.

Mac is now reunited with his son Michael, his parents, sisters, and many other close family members and friends.

Mac will forever be remembered for his strong work ethic, peculiar wit and for being the rock for the family that he loved so much.

Graveside services will be held on July 24th at 11:00 am at the Hagerman Cemetery. Services will live stream on Facebook @ https://www.facebook.com/ummvm/ on the United Methodist Magic Valley Ministries page.  A luncheon will follow at the Hagerman American Legion Hall.  During this time of social distancing, we ask that you practice safety measures.

In lieu of flowers, donations can be made to the Hagerman Methodist Church, Hagerman Masonic Lodge, or Hagerman Alumni. Services are under the direction of Serenity Funeral Chapel Life Celebration Center & Cremation Services of Idaho, 502 2nd Ave North, Twin Falls, Idaho.  Condolences may be shared at www.serenityfuneralchapel.com.

To send flowers to the family or plant a tree in memory of Ernest "Mac" Billiard, please visit our floral store.
Read Less

To send flowers to the family or plant a tree in memory of Ernest "Mac" Billiard, please visit our Heartfelt Sympathies Store.

Receive notifications about information and event scheduling for Ernest

Provide comfort for the family with a meaningful gesture of sympathy.

Show you care by sending Flowers

We encourage you to share your most beloved memories of Ernest here, so that the family and other loved ones can always see it. You can upload cherished photographs, or share your favorite stories, and can even comment on those shared by others.

Posted Jul 25, 2020 at 12:00am
Janet and family, we will always have fond memories of you and Mac , when our kids were in school, chaperoning Senior sneaks, ball games, golf and your friendship. Our prayers are with you all. Nova and Ralph
Comment Share
Share via:
SH

Posted Jul 23, 2020 at 12:00am
SPATHIPHYLLUM was purchased for the family of Ernest "Mac" Billiard by Shery (Morris) Harmon.   Send Flowers My sincere condolences to Janet, Jeri, Tony and the entire family. Mac truly was one in a million. Shery (Morris) Harmon
Comment Share
Share via:
DG

Posted Jul 22, 2020 at 12:00am
A Memorial Tree was ordered in memory of Ernest "Mac" Billiard by Dencil Gold.   Plant a Tree It was my pleasure to be your classmate. I remember the good times Dencil Gold
Comment Share
Share via:
HS

Posted Jul 22, 2020 at 12:00am
SPATHIPHYLLUM was purchased for the family of Ernest "Mac" Billiard.   Send Flowers With warmest memories of childhood, you have my deepest condolences. Joni (Holmes) Isaacson
Comment Share
Share via:
SK

Posted Jul 22, 2020 at 12:00am
A Memorial Tree was ordered in memory of Ernest "Mac" Billiard by steve kysar.   Plant a Tree To Janet and Family, not as many left; a jewel in a jeweled valley. steve kysar
Comment Share
Share via: 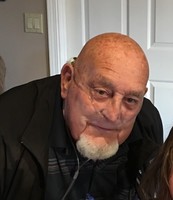