To share your memory on the wall of Jackie Goodman, sign in using one of the following options:

Print
On February 23rd, Jackie “Jack” George Goodman passed away peacefully, at his home, after a long and courageous battle with cancer.

Jack was born on April 9, 1937 in Nampa, Idaho. Jack was raised in Idaho, Oregon, and California. Af... Read More
On February 23rd, Jackie “Jack” George Goodman passed away peacefully, at his home, after a long and courageous battle with cancer.

Jack was born on April 9, 1937 in Nampa, Idaho. Jack was raised in Idaho, Oregon, and California. After graduating from High School, Jack enlisted in the Air Force, and spent four years serving his country, several of those years as part of a Strategic Air Command crew of B-29 bomber with nuclear capability.
Jack settled back in California following his military service, and this was where he met his wife of 57 years, Mary Ruth Poferl. Jack and Mary were married on May 19th, 1963. Jack and Mary had one son, Mark Goodman.
Jack, Mary, and Mark moved to Jerome, Idaho in 1972, and Jack and Mary finally settled on a small farm in Buhl, Idaho in 1990.

It was in Buhl, that Ida-J-Mar Farm flourished and became home to Jack’s heritage herd of Irish Dexter Cattle that he so loved. Jack was a conscientious farmer, was devoted to organic and sustainable farming practices, and could care for livestock, and animals of all shapes and sizes like no other.

During his life, Jack enjoyed so many wonderful activities, many of which were enjoyed directly with family members. Skiing, canoeing, and fishing were among many of Jack’s most favorite outdoor activities. Racing cars at the local speedway kept Jack busy on many Saturday nights, and Jack was a talented mountaineer, and climbed several of the United States highest mountain peaks with his son Mark and daughter-in-law, Mya tied to his rope.
Jack was an avid reader, with a passion for poetry, and became an accomplished writer and poet himself. Everyone in the family knew that each birthday and special holiday would be celebrated with a poem from Jack created especially for them. Jack wrote often for Western Horseman magazine, and The Mountain Gazette. In 2009, Jack published “Wind Songs From Turtle’s Back”, a collection of poems focusing on the sensitivity of the natural world all around us.

Jack is survived by his wife, Mary, who will continue to reside at Ida-J-Mar Farm, son and daughter-in-law Mark and Mya Goodman (Indiana), granddaughter Savahna Goodman-Egbert (Maryland), and grandson Gavin Goodman (Indiana). Jack enjoyed twin great-grandchildren, Eva and Flynn who loved him dearly.
His family, extended family, and friends will all miss him very much, and loved him dearly.

Frozen Dreams – Wind Songs From Turtle’s Back
“Unaware of my passage, a small worm sleeping beneath the quiet frozen earth dreams of wings and paws and hooves, gentle wind and warm rain, the endless sky.”
We love you, and miss you already Papa.

To send flowers to the family or plant a tree in memory of Jackie "Jack" Goodman, please visit our Heartfelt Sympathies Store.

Receive notifications about information and event scheduling for Jackie

There are no events scheduled. You can still show your support by sending flowers directly to the family, or planting a memorial tree in memory of Jackie "Jack" Goodman.
Visit the Heartfelt Sympathies Store

We encourage you to share your most beloved memories of Jackie here, so that the family and other loved ones can always see it. You can upload cherished photographs, or share your favorite stories, and can even comment on those shared by others.

Posted Mar 02, 2021 at 02:40pm
Brother Jack. We were never close but I remember many times I spent with Jack as a young child. Jack was the most intelligent person I have ever known. I remember spending a few summers with him. We would build things and I would just listen to him. He was a slow talker and a better listener. He never had much to say but what he did say was meaningful. What I mean is when he did talk, it had meaningful elements in what he said. It was like he was communicating something that was not directly expressed. There were words in between his words. I also remember when he got out of the Air Force, he brought home a parachute. He has it in the old shed in back of our house. Well, one day I took out the parachute and got on the roof and was ready to jump off and see how it worked. He caught me right before I was airborne. I thought it was hilarious. Anyway, he will be greatly missed. Brother Jack, see you later. Keep a space for me up there. Royal Goodman (Younger Brother) Madera California.
Comment Share
Share via: 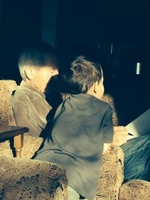 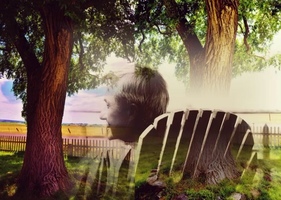 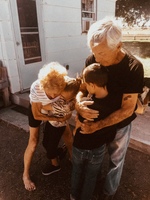 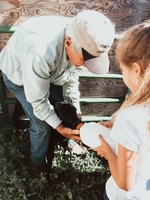