To share your memory on the wall of John Bonnett, sign in using one of the following options:

John was born to Robert Kline and Martha Tunstall Bonnett at their family home in Moscow Idaho. He attended schools in Moscow graduating from High Scho... Read More
John Ralph Bonnett passed away peacefully Friday, June 19th, 2020 at the age of 93.

John was born to Robert Kline and Martha Tunstall Bonnett at their family home in Moscow Idaho. He attended schools in Moscow graduating from High School in 1944. In September 1944 John enlisted in the US Navy and served during World War II as a Navy Storekeeper until June 1946. He returned to Moscow and enrolled in the University of Idaho in the fall of 1946. It was at the University of Idaho that he met Betty Jean Holden. They were married in June of 1948 and spent their honeymoon at their family cabin at Hebgen Lake, Montana. They then moved to a farm north of Moscow where they were wheat farmers. In 1950 John was ordained and installed as an Elder in the First Presbyterian Church. Also, in 1950, after two poor crop years, John and Betty moved to Idaho Falls, Idaho, and John worked for Betty’s father at the Home Service Laundry.

John learned the laundry and dry-cleaning business and in 1953 was invited to start the laundry operation at the National Reactor Testing Station, west of Idaho Falls. He developed a decontamination process for worker's protective clothing and wrote a research report for the Atomic Energy Commission. John ran their laundry for 3 years and was then placed in charge of the scheduling of repair and construction work for the craftsmen at the Material Testing Reactor at the NRTS.

In 1961 John was recruited to the American Potato Company in Blackfoot, Idaho as their Manager of Personnel and Industrial Relations. Betty and John moved with their four children, John Holden Bonnett, Robert Kline Bonnett III, Brenda Jean Bonnett, and Nancy Lynn Bonnett to their new home in Blackfoot. During their years in Blackfoot, John was active in City and County zoning committees, United Way, and the United Methodist Church. His work gave him experience in personnel matters, heavy construction administration, contract administration, purchasing, and general business practices.

In 1970 John joined Briggs Builders, Inc. and moved his family to Twin Falls, Idaho in order to establish a Butler Building franchise office there. The business thrived until the financial crunch of 1980 at which time John established himself as a “Design-Build” contractor, subcontracting all work and managing the outside work himself. He also joined Sabala and Roy as a licensed Realtor for 5 years during this period. During the 1980s and 90s, John constructed a group of leased commercial buildings for his new business, Fourth Avenue Partners, L.P.

In addition to raising his family with Betty, John was an active volunteer in civic and church activities. He oversaw many additions and remodels of the First Presbyterian Church of Twin Falls, serving on the Session and as a member of the Chancel Choir and Bell Choir. He also served on the Planning and Zoning Commission for the City of Twin Falls and on the Old Town Advisory Board between 1985 and 1998. In 1991, John and Betty built their third family home together at Candlewood in Twin Falls.

In 2010 John and Betty then moved to Bridgeview Estates Retirement Community to live among their many Twin Falls friends and acquaintances and to enjoy the excellent care they both received while living there.

John passed peacefully, comforted by his pastor, the Rev. Phil Price, at his side. John was preceded in passing by their daughter, Nancy Lynn Bonnett, and wife, Betty Jean Holden Bonnett (2011). He is survived by three of their children and their spouses; John (Tina) Bonnett of Twin Falls, Idaho, Robert III (Jann) Bonnett of Shelton, WA., and Brenda (Jim) Atchison of Nevada City, CA. John is also survived by 11 grandchildren and 12 great-grandchildren.

Because of the current pandemic, a celebration of John’s life will be held with his immediate family at a future date. Please consider sending memorial gifts to the First Presbyterian Church of Twin Falls, 209 Fifth Ave. N., Twin Falls, Idaho. Arrangements are under the care of Serenity Funeral Chapel Life Celebration Center & Cremation Services of Idaho, Twin Falls. Condolences may be shared at www.serenityfuneralchapel.com

To send flowers to the family or plant a tree in memory of John Ralph Bonnett, please visit our floral store.
Read Less

To send flowers to the family or plant a tree in memory of John Ralph Bonnett, please visit our Heartfelt Sympathies Store.

Receive notifications about information and event scheduling for John

There are no events scheduled. You can still show your support by sending flowers directly to the family, or planting a memorial tree in memory of John Ralph Bonnett.
Visit the Heartfelt Sympathies Store

We encourage you to share your most beloved memories of John here, so that the family and other loved ones can always see it. You can upload cherished photographs, or share your favorite stories, and can even comment on those shared by others.

Posted Jul 01, 2020 at 12:00am
I'm John and Betty Bonnett's granddaughter, the yougest daughter of their youngest daughter, my late mother Nancy Bonnett. I was able to share a few words at First Presbyterian on Sunday and met a handful of Papa's friends who had loving things to say about him. I'm so grateful for that. Some of you were interested in keeping in touch. Please do! My email is la.peregrinita@gmail.com.  I'd like to share this memory today: Late in life, Papa was receiving a LOT of requests for financial support in the mail, often dozens a day. So I asked him if he ever wrote RTS on the mail to send it back. His response, "What's that?" So we had a conversation about Return to Sender. And he said he would head to the mail store and have a RTS stamp made. Great idea!  He returned from the mail store with a custom stamp that read, "I regret to inform you that John Bonnett will no longet be able to correspond with you." ????? That was Papa's way: classy, direct, kind.  He was my favorite person. He was my teacher, my parent, my reason for going home, my spiritual guide, my beacon of love that could reach me anywhere in the world to remind me of who I am when I was most lost. He could fill a room with grace with a simple 'Hello there,' and he had a way of silently letting those in his presence know that he cared for them, that they belonged, that it was a gift to be sharing time and space together. God bless you, Papa.  If love reveals The Paradise, I will always know where to find you.
Comment Share
Share via: 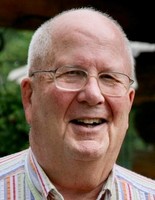