We're sorry but the candle you have selected is currenty in the process of being purchased or has just recently been purchased.

Please feel free to select another candle or check back in 15 minutes to see if the candle you have selected has been released for purchase.

We're sorry but there are no candles available for lighting.

You have already begun a candle purchase session. If you would like to continue with your current candle choice please click "Continue" otherwise please click "Select Another".

In Memory of
Shirley Eleanor
Bolton (Halverson)
1934 - 2021
Click above to light a memorial candle.

The lighting of a Memorial Candle not only provides a gesture of sympathy and support to the immediate family during their time of need but also provides the gift of extending the Book of Memories for future generations.

In the event that there is an error
in the information presented,
please contact the funeral
home by clicking here. 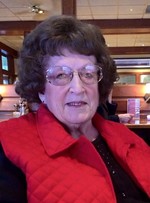 Shirley Eleanor (Halverson) Bolton was born during the Great Depression to Andrew Gearhart Halverson and Carrie Mae Todd Halverson on January 30, 1934. It was a frigid Magic Valley Winter’s night in a small farmhouse just outside Castleford, Idaho, near her maternal grandparents’ original homestead. She was an only child and spent a lifetime wishing she had brothers and sisters.

When she was a few months old, Shirley’s folks moved to 160 acres southeast of Twin Falls, Idaho, where her father farmed for the next half century. She rode the bus to attend Bickel School, then the original Twin Falls Middle/High School when it was in the beautiful historic building across from City Park. She graduated in 1952. Shirley was a member of the concert choir, the yearbook staff, Quill & Scroll, and a baton majorette. Later in life, she attended night classes to become accomplished in bookkeeping and office management.

Shirley was often recognized by many when out and about in the community of Twin Falls -- having worked for a time at Twin Falls Bank & Trust before becoming the office manager for the medical practice of Charles Wurster, M.D. (across 4th Avenue from Twin Falls Public Library) until his retirement. She then worked in payroll and accounts payable at Magic Valley Memorial Hospital on West Addison Avenue until her own retirement in 2004. She loved animals, creating ceramics, picnicking at Steer Basin in the South Hills, going out for pie at Idaho Joe’s, and visiting the Oregon Coast. She was an avid reader and life-long student of Bible studies. She loved the old hymns of the faith.

Shirley was a life-long Baptist. Her grandfather, Isaac Todd, helped establish the First Baptist Church in Castleford, Idaho. Her name and that of her parents are in the cornerstone of the First Baptist Church building on Shoshone Street in Twin Falls, Idaho. She became a member of Twin Falls Grace Baptist Church in 1967 just after it was founded, and her heart remained with that congregation the remainder of her life. She served as church pianist for many years, substituting as organist whenever needed.

The family wishes to thank Serenity Transitional Care for their steadfast devotion to and care of Shirley for the last 2-½ years of her life, and Dr. Ryan Callahan of St. Luke’s Orthopedics for his immeasurably caring and humane approach to his profession. His kindness will long be remembered.

Cremation services are under the care and of Serenity Funeral Chapel & Cremation Services of Idaho, 502 2nd Ave. N., Twin Falls, Idaho. For tributes and condolences go to www.serenityfuneralchapel.com. At Shirley’s request, no services will be held.
Please send memorial donations to the Twin Falls Animal Shelter in Shirley’s name.

To send flowers to the family or plant a tree in memory of Shirley Eleanor Bolton (Halverson), please visit our Heartfelt Sympathies Store.

This Book of Memories brings those affected by loss together by encouraging communication and self-expression. By giving friends and family a special place to tell their stories and express their feelings of loss, it helps them care for one another during a very difficult time. Click on any of the links to the right to access features or information within this memorial website.